Solar Panels work very well in Ireland.  As Irish people we have a conception that we do

not have much sun here but the reality is we receive as much solar radiation as France, Germany and the UK – all places where solar panels have been serving their populations well over the last few decades.  Ireland receives only 6% less solar energy than Germany and 26% less than the very sunny Spain.

The map here shows Ireland with an average of somewhere between 2.6 and 3.0 “sun hours” a day which you can see is equivalent to mid France and Germany.  This means Ireland has more than adequate solar energy available to power solar panels to produce heat and electricity.

The solar energy we receive from the sun is much greater than the total amount of energy we actually use – if we use solar panels and other forms of solar energy we could eventually eliminate the need for burning expensive fossil fuels like Oil, Gas and Coal.   Solar energy is predictable – we have very solid data on how solar panels in Ireland work in our climate so we can accurately predict how much energy we can produce with this technology.  Most importantly solar panels produce clean, carbon free energy and  unlike fossil fuels do not produce any environmental risk such as climate change or air pollution.

Payback on Solar Panels in Ireland

Solar Panels in Ireland also pay for themselves which is something that cannot be said about fossil fuel systems.  A well priced solar panel system for water heating will pay for itself in less than 7 years, if you are a high water user it will be much quicker than this.  The systems will continue to operate for well over 20 years so in essence you will be making money off this system for 13 years and more.  This is far more lucrative and risk free than leaving your money in the bank.

There are two main ways that solar energy is used in Irish buildings :

Solar energy is free heat which can be used for space heating and producing hot water. If we use solar energy to its full potential in our buildings, we can significantly reduce reliance on fossil fuels to produce heat.  However it always pays to be more energy efficient before using solar panels in Ireland.  The lower the energy needs of a building in the first place, the more the contribution from solar panels. For hot water solar panels in Ireland are a no brainer. There is always a need throughout the year for hot water and using solar thermal can make a significant contribution to reducing overall hot water energy demand.

Larger scale active solar thermal technologies can also be used for cooling and steam production. Steam produced by solar panels can be used to drive turbines for electricity production but that is typically on a very large scale and mostly suited to hotter climates than in Ireland.

There are two main types of solar panels for heating: 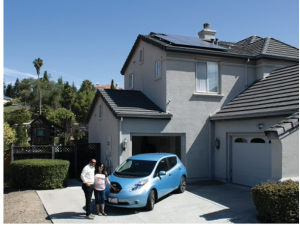 solar PV panels or photovoltaics. These solar panels when exposed to the sun create an electric current and large amounts of electricity can be created. This can address whole or partial electricity loads in buildings.   Solar panels in Ireland for producing electricity are typically connected to the national grid which allows for unused electricity to be exported.   It is expected that a payment for this electricity will be available soon but at the time of writing this is not the case in Ireland.

The applications of grid-connected solar panels in Ireland are wide-ranging. Using the electricity produced by the PV system directly in the building instead of purchasing electricity from the grid allows the home owner to offset their electricity use. In some buildings, where the demand for electricity is steady during the day all of the electricity produced by the PV system is used. This is important to consider when looking at the economics of a PV system. The way that electricity within the building is used must also be checked, sometimes a change in lifestyle like timing appliance to come on when solar gain is highest can make significant savings.  Grid-connected PV systems require very little if no maintenance but as with all equipment it pays to service them regularly.

As with solar thermal, efficiency in the building should be addressed first. The lower the electricity demand in the building, the greater the proportion of the electricity demand that can be provided by the solar panels. Therefore it is important to try to reduce demand through behavioral changes and by using low energy / energy efficient appliances and lighting as well installing solar panels in Ireland.

More info is available from here: