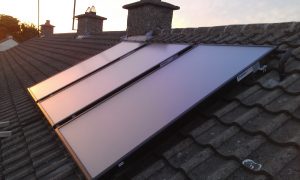 Other advantages of flat plates are:

Some things to consider:

The Energy Trust report entitled: “Here comes the sun – a field trial of solar water heating systems” is a comprehensive study of 88 solar thermal systems installed all over the UK and Ireland. 34 of these were evacuated tube systems and 54 used flat plate solar panels. The study found that there was no real difference in the total energy yield from each type of solar panel system. They said:

There is a common tendency to assume that evacuated tubes are more productive because they are more “efficient” but as is pointed out in the study this does not mean that the system will produce more energy than a suitably sized flat plate solar panels. So be wary when someone says that their solar system is more efficient than the next guy’s as this doesn’t necessarily mean they can produce more energy – always ask for evidence of the energy yield of the entire system..

The importance of the cylinder and controls.

Some other interesting points were raised in the report including the importance of having a well insulated solar cylinder and the impact the timing of auxiliary heating had on the performance of the solar system. The main points were:
1. A well insulated solar cylinder is paramount. Heat loss from the cylinder could outstrip the energy collected form the solar panels making the solar panels useless – a suitably insulated cylinder has to be installed with a system to make it viable.
2. The timing of the back up heating. By making sure that the secondary source of heat (immersion, gas/oil boiler etc..) comes on after the solar panels have delivered as much heat as possible, increased the performance of the system. This is because solar panels require a low temperature in the bottom half of the cylinder to be as productive as possible. The study recommended that in solar panel systems it is best to wait till the evening or very early morning before putting top-up heat into the cylinder from auxiliary sources.
3. 84% of householders were either fairly or very satisfied with their systems with 50% being very satisfied! Overall customers are happy with their solar systems.