A recent article in the Independent talks about solar panels producing electricity on a larger utility scale.  These solar pv farms where lines and lines of solar panels are installed to produce large amounts of electricity in the multi MW range.  These "solar farms" are set to become a feature of the land scape in Ireland particularly if a Feed in Tariff (FIT) is introduced in Ireland.  There are certainly many solar companies currently vying for suitable land to install solar panels in advance of a favourable decision on the FIT. 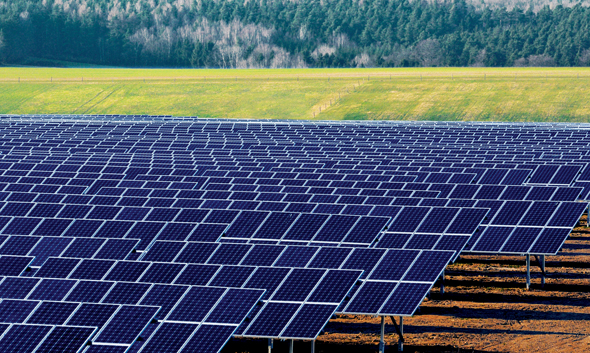 The article itself is well worth a read - you can see it on independent.ie here  but we have outlined some of the best points below:

1. Farmers have been offered over €1,000/ac for 25 years by a number of different developers looking to secure the most advantageous sites in advance of the Government publishing its policy on renewable energy in the coming months."

2. It is believed that the next 15 years will see up to 10,000 jobs being sustained by solar power projects here."

3. The main driving forces in determining where solar pv farms can be installed in these numbers are the solar resources available and the grid connections available. The areas where the resources for solar panels are high and grid connections low are the most attractive now.

4. Farmers are those who are being approached with offers to install solar panels on their land - the advice in the article is for Irish farmers to proceed cautiously with any approach and do their research.  Get a few quotes if possible.

5. The IFA are warning farmers who are being approached regarding land deals to be cautious about the companies they are talking to. They should firstly make sure these companies have actually produced solar energy previously and have experience managing solar pv farms.

6. Solar pv farms and solar panels will increase in popularity in Ireland.  There is plenty of scope in the country for solar panels. Also investors like the technology because it is a stable investment.

7. The costs involved in these solar farms are still higher than wind or Biomass but there are advantages to using solar panels that other technologies don't have. Notably there is no maintenance, little visibility and the project can be completed much quicker than other renewables.

Some facts about Solar Panels

Simon is a Registered Renewable Energy Installer with SEAI and a Chartered Energy Manager. He has over 10 years experience working with solar panels and is passionate about making it as easy and affordable as possible to install solar panels in homes and businesses across Ireland. You can contact him on simon@glenergy.ie