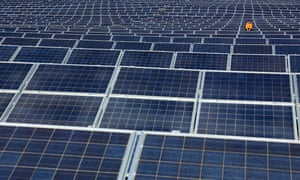 Starting from the 1980s, solar panels to generate electricity from sunshine have reduced by 10% in cost each year. That will continue, the research says, meaning solar is predicted to produce 20% of global energy requirements by 2027.

Even in its “high renewable” scenario, the IEA assumes solar panels will produce only 16% of electricity by 2050. .

Mathematics professor Doyne Farmer, who co-wrote the paper, said the research could help to shape renewable energy policy.  Doyne has stated that “Sceptics have claimed that solar PV cannot be ramped up quickly enough to play a significant role in combatting global warming... "

The research was supported by the European Commission and US Department of Solar Energy Technologies Office.  It comes as India and France are looking to create a solar alliance to scale up the adoption of solar panels worldwide, increasing access to energy and reducing greenhouse gas emissions.

India’s coal minister Piyush Goyal said using solar panels is now cheaper than coal in some states. He said through his twitter account “Through transparent auctions with a ready provision of land, transmission and the like, solar tariffs have come down below thermal power cost”

Simon is a Registered Renewable Energy Installer with SEAI and a Chartered Energy Manager. He has over 10 years experience working with solar panels and is passionate about making it as easy and affordable as possible to install solar panels in homes and businesses across Ireland. You can contact him on simon@glenergy.ie

View all posts by: Simon